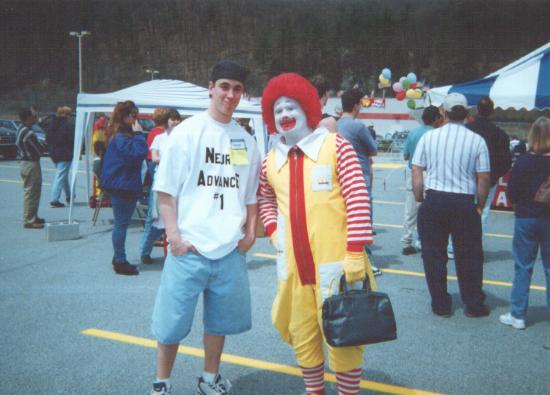 John B., TBI survivor and NeuroAdvancE client, was recently hospitalized for an extended period of time, causing his family great financial as well as emotional stress.  In their time of need, the family received some timely relief from a wonderful local organization called the Friends of Pike County.   "Friends" is a group of volunteer fundraisers who help residents of our Pike County.

After his recovery, John came to us at NeuroAdvancE with an idea: he wanted to express his gratitude to his "Friends" by doing a little fundraising of his own.  As John has had considerable prior experience with fundraising, we at NeuroAdvance agreed to assist in whatever manner possible.  Without hesitation John quickly marshalled the resources of three corporate sponsors: NeuroAdvancE, WalMart and McDonalds.  Thanks to the generous contributions of these three sponsors, John created the the first annual Big Burger Bite.

The Big Burger Bite was fashioned after traditional eating contests, in which individuals compete to see who can consume the most hamburgers in one hour.  This year there were three heats, with approximately 6 people in each heat.  Eighteen contestants in all devoured 360 burgers!  The Grand Prize Winner consumed 18 burgers in one hour.  Two separate bands played during the competition.  Ronald McDonald was there to join in the fun, there were raffles, balloons and let's not forget, face painting for the kids!  John's wife Debbie, also a TBI survivor, was on hand to oversee to these details and many other atmospheric aspects of the afternoon.

John worked feverishly, canvassing, collecting, contacting and advertising the event, and his efforts paid off.  With some assistance and support from his friends at NeuroAdvancE, John personally raised $500 dollars in addition to the funds donated by the sponsors.

NeuroAdvancE was proud to sponsor the contest, as well as provide organizational assistance to John with his project. It not only helped to raise funds for a worthy organization, but helped a survivor to realize his abilities.  Great job everyone!!!